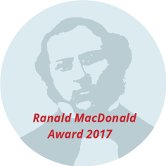 With Our Own Hands (LM Publishers, Utrecht, 2015), by Dutch ethno-botanist Frederik van Oudenhoven and Austrian geographer and political scientist Jamila Haider, is a truly monumental study, some seven-hundred pages in length. It describes the ways in which the Pamiris of Afghanistan and Tajikistan deal with their food, from the age-old crops they grow to the god-given bread they break. This has resulted in a splendidly designed book in English, Dari-Persian and Tajik, containing innovative typography of Dutch origin and images by renowned photographers. It is the first written documentation of – hitherto orally transmitted – recipes of, and rituals accompanying, the food of an isolated community in the Himalayas. They form an Asian group of people who are to protect what they hold to be good, true and beautiful from far-reaching European and North American influences.
With Our Own Hands more than deserves to receive the 2017 Ranald MacDonald Award.
Share this
Share on FacebookShare on Facebook Share on LinkedInShare on LinkedIn TweetShare on Twitter Share on WhatsAppShare on WhatsApp
Go to Top